It‘s common knowledge that satellites are used for surveillance purposes, but only very few people know that they have an even more significant influence on us.

Satellites are the Dragons‘ and Fallen Angels‘ technologies and were put in our Earth orbit about 400 years after Atlantis disappeared into the deep sea.

HAARP, which receives the radiation from these satellites and transmits it to various antennas and chemtrails, whose heavy metals turn us into antennas ourselves, is a perfect system of reception and distribution. (Read about HAARP and chemtrails in our previous articles.)

These satellites are supposed to influence earth‘s electromagnetic system and also manipulate 3 of our endocrine glands which are in direct connection with 3 of our upper main chakras (thymus gland – 4th chakra, pituitary – 6th chakra, epiphyses – 7th chakra) in such a way that contact to higher dimensions is virtually impossible. In a holographic world view this would mean that we are sort of cut off from the infinity on the upside or rather from the connection to our source.

But the satellites also play an important role when it comes to influencing our emotions. Using a certain negative polarity it is difficult to keep up that harmonious emotional balance which is actually our natural state.

The Dragons have been working with the Reptiles since about 1700. They are providing their technologies in order to strengthen the Fallen Angels‘ energetic influence on earth.

The technically used frequencies of the electromagnetic spectrum range from longitudinal waves to terahertz radiation. Thus radio waves, radar, GPS and direction finding are used to influence our emotional and mental body. The peoples‘ own perception is influenced by creating images, emotions and thought patterns – and this is the great illusion we succumb to. A hypnotic state that makes people believe in a false reality.

Through the law of “What‘s inside, is reflected on the outside” as well as the law of action and reaction, a perverse/unnatural world view is created.

This emotional influence and the manipulation of our 7th chakra have led to us losing our consciousness of immortality. This is the only way the law of karma works.

The belief in illness and mortality coupled with the illusions of a reality, which are planted in our energetic field and have to be experienced again and again because they are not real and therefore cannot be processed, all add up to create the cycle of death and rebirth.

Waking up from this hypnotic state!

We are now at the beginning of a new era. As of 21.12.2012, with the earth‘s rise into the 5th dimension, the energy of the source becomes stronger and stronger.

Rather than being recipients of hypnotic manipulation, we are now increasingly receiving the higher dimensions with their energy of love and unity.

And we Lightworkers are here to complete this process. 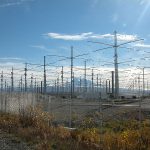 How HAARP and Chemtrails affect all lifeManipulation