Atlantis and its connection to our time

It‘s difficult to determine when Atlantis existed and when the events there took place, because today we have a sense of time which did not exist then.

1221 years before it sank us Lightworkers of extraterrestrial origin came to earth from our sometimes destroyed higher dimension planets. We built our space station Atlantis approximately where Egypt is located today. In order for us to be able to even live on earth our space station had to be adapted to our energetic conditions and we had to adapt to the restrictive conditions of the earth as well.

The fallen angels are part of the 9th dimension, the angel dimension. They are the guardians of dark matter and are tasked with separating beings of the universe from the light. They are intelligent, they work together, they are extremely deceptive and they keep you away from your center (love, spiritual guidance, Source) using fear and negative emotions.

We started making changes to the human race to give them the opportunity to strengthen their connection with the Source. The beginning of the transformation process into the 5th dimension hence began in Atlantis and we are part of it. The war for Earth that began then continues to this day.

After the fallen angels had landed on earth, they began manipulating its inhabitants to bring about the destruction of the planet. Their influence on the earth’s magnetic field considerably contributes to their goal. This, in turn, contributed to the pole shift and natural disasters.

The fallen angels put another alien species (“Reptiles”) on Earth. They are supposed to govern Earth in a way that benefits the fallen angels‘ intentions. The Reptiles, for their part, brought many changes with them, such as illness and death, but this was not possible without introducing the law of karma. In order to be able to further accompany people in their transformation process, we had to integrate ourselves into the karma process as well.

As a result of the radioactive experiments by the Reptiles on Earth and the resulting catastrophes, part of Atlantis broke off and sank into the sea. It was thus impossible to keep our space station Atlantis on the Earth’s surface, so we withdrew to the bottom of the sea. However, we were able to change the human race beforehand to ensure that despite the massive manipulation of the fallen angels, contact to the Source was not completely blocked.

Due to the energetic changes on earth, which were partly of natural origin, but were also caused by the fallen angels and Reptiles (pole shift), the influence of those extraterrestrials on humans grew greater and greater.

The reptiles took control and founded a powerful ruling dynasty the Pharaohs. American presidents descended from this blood line until recently.

They also built the pyramids during the last days of Atlantis in Egypt and other regions of the world to split life energy, also known as orgone energy, from matter. They transformed orgone energy which on encountering radioactivity becomes the most hostile energy of all, DOR. Positive and negative were two separate forces working against each other from that time on. A world of polarity was created. Bipolar (life-friendly) energies are replaced by monopolar (hostile) energies. The basis for poisons and diseases had been created. Many viruses, poisons and fungi are not of earthly origin but were brought to earth by Reptiles. Pathogenic bacteria were brought to us by the Dragons (another alien race that was also put on Earth by the fallen angels to serve as their allies). This ocurred about 800 years after the fall of Atlantis.

The crystals installed in the pyramids with negative programming are no longer there. They were there only temporarily since they would have destroyed the whole planet had they been left there for longer. After the pole shifting process they were removed and placed in different places on earth such as Cyprus, a part of Atlantis which later reappeared after it sank.

The negative influence of these crystals still has a significant impact on Earth and humans today, but is not that significant anymore now that there are other ways of life-hostile manipulation such as HAARP, chemtrails, microwaves, the internet, mobile phones, etc. 5G technology for example only requires 2 precent of its power to operate 5G while the other 98 percent are used for spreading manipulative energies.

The fallen angels‘ means are subtly manipulative. Using their technologies nowadays they are attempting to put mankind into some sort of separateness. The excessive use of these technical possibilities makes humans feel separated from their higher self, their spiritual guidance and his inner center of truth. All attention and energy is directed to insignificant superficial things. Humans are separated from the All-One and are thus vulnerable. Like a gazelle separated from its flock.

There are about 14,000 beings on our planet who are subject to the power of the fallen angels and work on their behalf against us Lightworkers. They control the general consciousness through fear. Imagine that – 14,000! A relatively small number to control all the beings on this earth. Where there is fear, there is no love and hence separateness. Only when we free ourselves from fear can we feel our real self and move from an ego-consciousness to a heart-led consciousness.

This is our choice, free will.

Presently, we are living in a similar time – similar to the time before the Atlantis went down. The difference is that the Age of Aquarius enormously amplifies the energy of the Source on Earth.

There have been several waves of “awakening” and this is one of them.

The Lightworkers of this world are uniting. 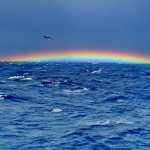